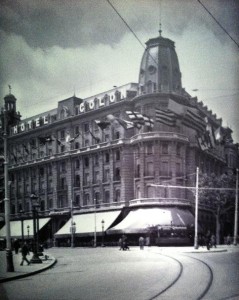 Enric Sagnier i Villavecchia was an architect well related with wealthy people and clergy, and this let him to be the architect who built more buildings in Barcelona (over 300). Despite that, he also built out of Barcelona. He applied eclectic style (different styles together in the same building), neoclassical style, and some time he was closer to modernist style. He found the inspiration, such as Renaixença movement suggested, in the medieval architecture (Romanesque and Gothic), splendor time of the medieval Catalonia.

Going around Barcelona, it’s sure that you have seen lots of his works: the Expiatory Temple of Sacred Heart (Tibidabo basilica) for the Salesians of Don Bosco; the New Custom of Barcelona; the Justice Palace; the Caixa Pensions building in Via Laietana Avenue; the Pons houses in Catalonia square with Passeig de Gràcia Av., and in front the mythic and disappeared Hotel Colom (photo); the Manuel Arnús house, known as “el Pinar” and Arnús bank in Catalonia square with Rambla.

There are many more, but due to his relationship with the clergy and the conservative politicians he was despised by the Noucentista movement, and as a consequence remaining in darkness. At present, different private and public institutions offer exhibit to know him better.