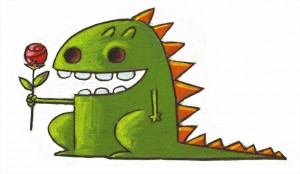 Saint George was born and grew up in Cappadocia, a part of Turkey nowadays. He lived between the third and the fourth century. He was a roman captain and he became personal guard of emperor Diocletian.

He converted into Christian religion, just in a period of time that, following Diocletian’s orders, the prosecution against Christians by the Roman Empire took place. As a consequence, in 303 he died as a martyr because he didn`t give up his beliefs.

In the Middle Ages, in the Crusades, when Christian knights went to conquer Jerusalem, they heard about that captain. In that moment he was already very popular and they spread the legend. The legend grew and according to it he fought against Arabs in all around Europe, for instance he went to Montblanc to defeat the Arab troops.

Impressed by his bravery and his heroic deeds he and his flag were adopted by a lot of countries as their Patron Saint. Nowadays he is the Patron Saint of Catalonia, England, Portugal, Genova… and we can see in their flag or in a part of it the coat of arms of Saint George: a red cross over a white field.