What is celebrated in Catalonia on September 11th? 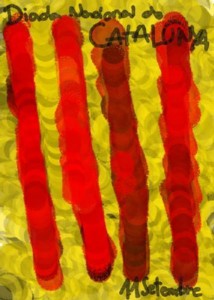 In the Succetion Spanish War the Aragon Crown bet on Charles of Austria in order to recover the politic power Aragon had had before joining Castilla. On the other hand the Bourbon saw the opportunity to enlarge his hegemony in Europe if they would occupy the Spanish Throne. This would affect the European stability and different countries took part in the Thirty years’ War. In the end England abandoned the conflict, leaving the Aragon Crown alone in front of the franc-Castilian army.

The opposition was hard and in 1713 the franc-Castilian army sieged of Barcelona city. The city with an army of 5000 soldiers didn’t surround, it maintained the siege 13 months, until on September 11 of 1714 when the franc-Castilian army crossed the city walls with 40000 soldiers. At that point the city decided to offer resistance street by street. Many of them died. And even the enemy chronicle speaks about the braveness of the citizens. Finally Barcelona felt and one year later Mallorca and Menorca did.

The punishment was great and the Institutions of the Crown, the Nation, the Laws, the Catalan language… were abolished or forbidden by the Decree of Nueva Planta. All power would be centralised from Madrid.

At beginning of the XX century, Catalonia adopted this September 11 as its National Day. It’s celebrated the braveness thought which they fought and Institutions are recalled which Catalonia and the Aragon Crown had possessed until then.